The resurrection of UK Decay has been a prophesized moment for a few years now, given that the Goth rock pioneers have been playing gigs recently for new material.  Abbo and his troupe of sardonic post-punkish fiends, despite having only one album to their name, are famed in the recesses of the underground. Their 1981 album For Madmen Only is a devilish slice of early deathrock that assisted in immortalizing the Goth rock movement of the 80s and establishing a unifying theme for all bands that fell within the genre.

Perhaps in the tradition of their namesake, UK Decay always struggled with solidifying a lineup. Bass became the bane of their existence, with 4-string axe men coming and going without much hope for becoming a mainstay for the band. It wasn’t until Edwin “Twiggy” Branch hopped on board that Abbo, the late Steve Harle, and Steve Spon produced what is regarded as the classic UK Decay lineup, touring all over Europe with their death-ridden brand of punk.

For Madmen Only is wrought with spooky guitar drones, wailing vocals, and brooding rhythms that deter on the edge of tribal. In the ranks of Christian Death’s Only Theatre of Pain and Alien Sex Fiend’s Acid Bath, this is the archetype of doom and gloom that inspired swarms of black-clad club goers and dramatic makeup in the 80s. The creepy-crawly battery of pummeling drums and discordant riffs are a direct synthesis of late 70s punk, filtered through caves and dungeons and midnight strolls. The band members may have lumped themselves in with the prototypical idea of punk, but their blasphemous lyrical obsessions and crazed croons exposed them to a whole slew of new audiences. For Madmen Only is the missing link between early Siouxsie and the Banshees and the latter romanticism of the alternative era. 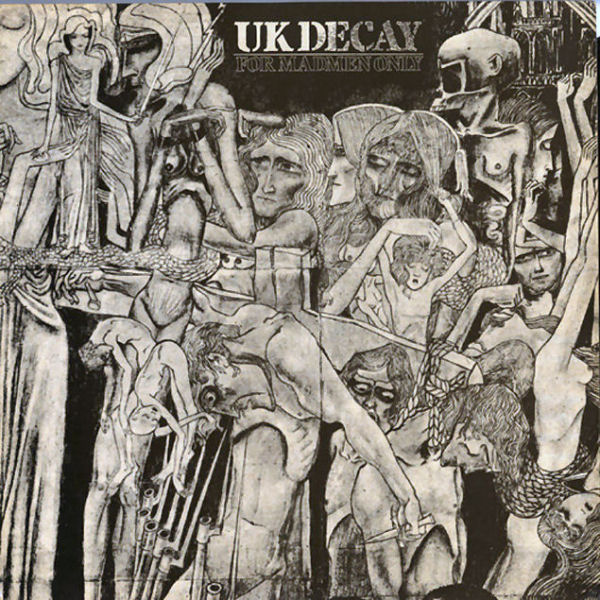 The 3-decade stretch between studio albums saw the continual switch of death and revival of UK Decay, spawning live albums, side projects, and an eventual silence. At the turn of the millennium, the group began playing gigs to a new generation of Goths, appearing at the Rebellion Punk Festival, Wave-Gotik-Trefen, Drop Dead Festival, DV8, Bats Over Milan, Road to Ruin, and the Moonlight Festival. The band’s nuanced discography of EPs, collections, singles, live recordings, and the famed studio album was unearthed in 2009 and thrust into the light of the world. Life was undoubtedly brewing in the catacomb of deathrock’s patron saints.

2013 saw the band’s official rise from the grave. New Hope for the Dead, an apt  descriptor of the band’s return, is replete in retro post-punk goodness that recalls their 80s material while serving as an appropriate sequel. The newest incarnation of the dead man’s kingdom touches on politics and social stigma in slimy, seething ways that only a band of such dark caliber could purposefully convey. Even the broken heart lament of “Woman With a Black Heart” is charming in its juvenile prose, while “Drink” is a dementedly fitting closer of twinkling pianos and violins across Abbo’s spitfire ramblings. In a time of an ever-changing socio-political climate, UK Decay’s latest dose of grimy punk rock feels relevant and refreshing, a bridge between today and the 80s. The future promise more debauchery from the group.